In dreams you lose your heartaches

In dreams you lose your heartaches 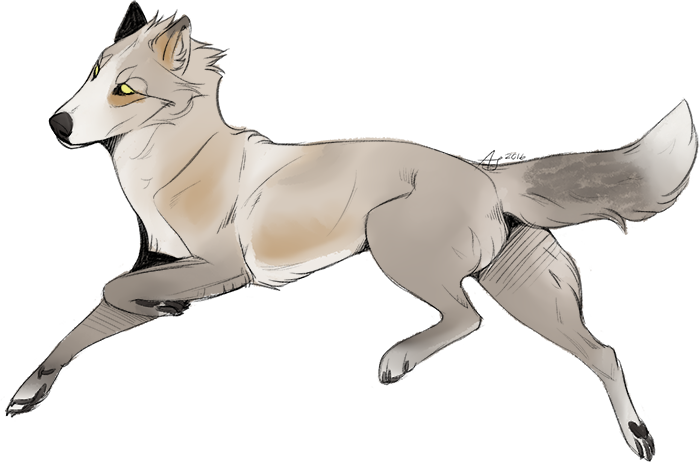 The girls ran giggling along the stream.

One -- a quick little grey fox -- hopped from stone to stone and occasionally weaved her way back in front of the slender wolf. The Luperci stumbled once or twice, but heeded the fox's yaps and got back to her feet again as if nothing had happened: even if the mud dirtying her white dress was evidence to the contrary. She laughed breathlessly every time she fell down, every time she got back up, and ran with a grin of determination on her narrow muzzle.

The fox suddenly weaved again and pounced something in the silty shallows, and Embla stopped, panting, and bent to stroke her friend's head. What is it, another pebble? she asked, opening up her palm. Jalda dropped something smooth and light in her hand, and she lifted it to the end of her long snout, squinting star-burst eyes. A shell! She grinned and slipped it into a pocket on the dress. You clever thing, she praised Jalda, who wiggled her muzzle into Embla's hands and wagged her tail.

Re: In dreams you lose your heartaches

pump your veins with gushing gold

She had always been such a frail, dainty thing.

In his youth, and even still, it was hard to approach this dandelion, this bright pit of light amidst the guarded brambles of her parents who had kept her close like a well-concealed secret from the outside world, coveted like fine jewels that speckled her meteor-streaked eyes. Julius had only watched her from comfortable distances; when she had started roaming the kingdom on two feet, when she had started venturing, he hadn't known, but her light and airy movements were a great source of envy; so weightless, boundless, free of the tethers that the kingdom held, free of whatever vines had wrapped Julius and kept him earthbound where Embla could float at will, though at least, for now, she was just as clumsy as any other.

"You're still just as carefree as ever, aren't you?" Julius finally managed, making an approach once the pixie-creature had stopped and stooped low to pet over her fox companion and examine treasures dug up from the silt and sands. His words were unintentionally pointed, as though Embla would spurn his presence; he didn't force a smile, and moved instead to sit on a stone at the creek bank, his pale gold toes dipping delicately into the water. "It feels like I haven't seen you in a long time, when did you finally shift?"