Switch to full style
Territories: Primeval Memories, Concrete Jungle, The Blacklands, Black Rock Islands
East of Halcyon Mountain is a lush wilderness full of history and memories. Prey and new growth have returned to the areas devastated by the 2008 fire, but here and there are still signs of what once had been.
Topic locked
'Souls Assemblage Eastern Realms comprises Halcyon Mountain and all lands northward, including the former Bleeding Souls territories, vacated after the 2008 wildfire. The old woods have since recovered and are once again rich and green, flourishing with new growth and abundant prey. 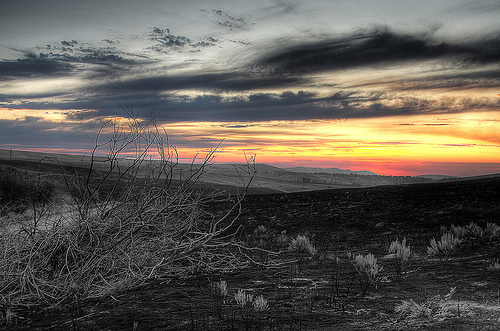 These are the former territories of Bleeding Souls, burned in the 2008 fires. Although there is faint evidence of life returning to this area, the fire was catastrophic, destroying much of the old-growth forests of the area, many of which were completely fire-intolerant. As a result, much of the vegetation was completely decimated and destroyed. Many trees have fallen, though some still remain, dead where they stand. Some greenery and evidence of life shows during the spring and summer months, but even this is sparse and stunted as the area struggles for its recovery. There are few prey animals to be found here -- indeed, it would seem the only animals managing to eke an existence in the burned areas are birds and other small rodents. Nonetheless, it is returning life, however unable to sustain Luperci it is. 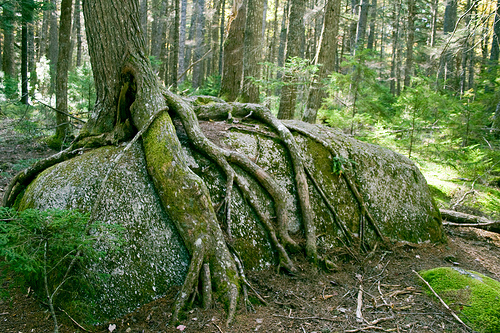 The Wentworth Valley cuts through the Halcyon Mountains and the Cobequid Foothills, formed by a glacier as it cut through the earth and slid toward the sea. Although a few tiny towns once existed within the fertile valley during the time of the humans, they have since fallen to complete ruin -- the only evidence of their existence is the occasional still-standing foundation of a house, or a pile of rotting wood. Some of the trees are bent at awkward angles, and the occasional dead log sits in an impossible place -- speared through boulders at the edge of the valley, for example. At one time after the demise of humanity, a great deluge came through the area, wiping it clean of any evidence of man. 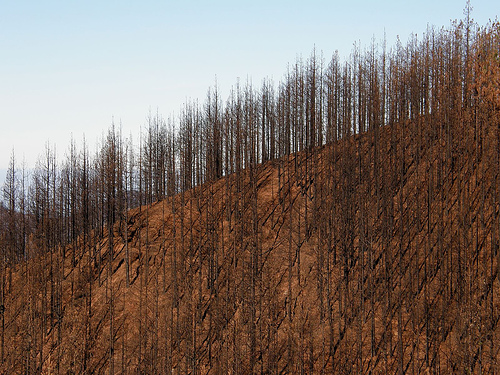 The Foothills, formerly a territory of Bleeding Souls, comprised of the low-lying mountains to the north of Halcyon Mountain. In comparison the larger ridge, these are mere rolling hills, though they are gray and foreboding. Stinking sulphur pits, evidence of the long-dormant volcanic activity in the area, comprise what were once kettle lakes and pits, and the area seems overcome with a dense, stinking fog. Even the formerly beautiful Tranquil Springs have become tainted and poisonous to drink from -- any other streams or pools of water in the area are a genuine gamble. The dead and dying remnants of the trees, spared death from the fire but dying a slower one as the land surrounding them seems to die, are steadily withering. Nevertheless, stubborn shrubbery still takes root here between the charred trees -- though they are stunted and gnarled in accordance with their harsh surroundings. Even the birds don't nest here -- the area is devoid of life other than the obstinate shrubs sprouting here and there. 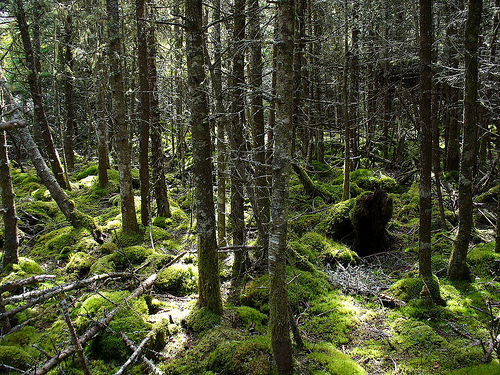 The Âmes de la Mort, stretching south of the Cobequid Foothills to the edge of the Moaning Wood, was once a dead, gray land, littered with dead trees and thirsty dirt. These lands were the initial tinder for the vast wildfire that consumed its surroundings. The territory, once home to the Shadowed Stars pack, had become withered and gray long before the fire; however, in the aftermath, it seems to have fared the best of its surrounding territories. Most of the trees here fell during the initial fire and have begun to rot away; saplings can be seen here, and although the land seems strangely flat and bare, there is evidence of green, returning life. Strangely, however, the predominant settler seems to be the English Oak, which is not native to Nova Scotia. The tree seems to quash its competitors, guaranteeing a forest predominated by the invasive species in several years' time. 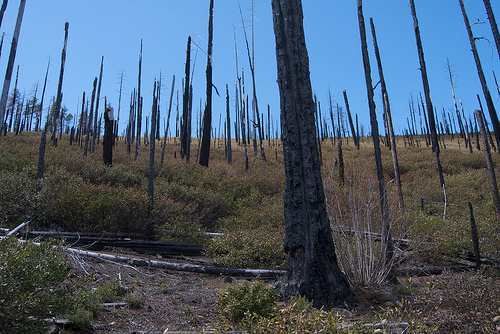 Often thought to be haunted in the time these territories were occupied, the Moaning Wood has grown no less strange, though its strangeness now lies in silence. The trees, once screaming and creaking, now lie in ruined shambles, blackened logs littering the earth. Here, the fire consumed the trees wholly, and though many of the dead remnants were quick to fall, the abundance of them in this area has smothered much of the potential for new tree growth. However, grass and other low shrubbery has begun to overtake the area, fed by the stream snaking through the territory. In the center of the territory, an unusually clean square is all that remains of the barn once constructed by the packmembers, the wood construction of the building long gone up in flames. With oak as the dominant tree populous, deeply buried seeds survived the fire and sprouted in its wake once again. Though spread thinly, and very young, it is entirely possible that small woodland may begin to grow in the dampest areas of the land once again. 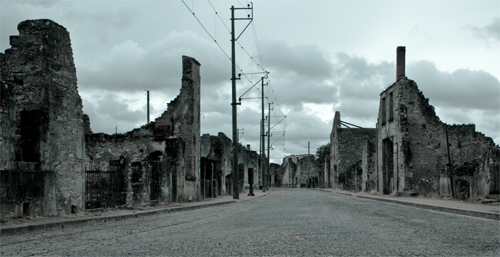 The city did not burn as well as the surrounding forests; nevertheless, char marks and other evidence of fire can be seen clearly in the old city of Sydney. Unlike other human areas, there is very little left to scavenge from this area. Only the raw materials -- the brick and metal of the buildings -- remain. Glass windows melted or shattered from the heat, leaving the city desolate and hollowed. Even the plant life seems to avoid the center of the city; while the old suburbs have begun to show signs of sprouting to forest, downtown remains barren and lifeless.

The Skeletal Sanctuary is all that remains of the once-beautiful suburbs of the city. The streets became rivers of fire in 2008, and bear the marks to prove it. Instead of straight, well-defined streets, most of the roads here melted and overflowed their borders, reforming and hardening back into solid asphalt when the fire retreated. There is not a house among these streets that wasn't touched by fire. In some places, where wooden construction was commonplace, the fire wrought total destruction. Only stone foundations remain, row after row of them lining the melted asphalt streets. In other areas, where brick construction prevailed, the houses fared better -- they still stand, though insides and roofs were most commonly gutted by flame.

While the city and its surrounding sprawl were obliterated by the fire, the suburban areas around the city have clearly fared better since. While wild greenery is not seen in the Sanctuary, small shrubs, skinny saplings, and even patchy grass grows here. Most structures have collapsed to their concrete foundations, though here and there, brick and stone fireplaces, chimneys, hearths, and the occasional wooden frames still remain. These eerie, skeletal remnants give the territory its name. 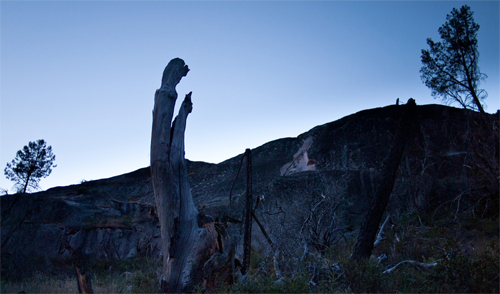 The northeastern most lands of the Cape Breton Peninsula suffered the worst damage from the fire. Years later, the mountainous ridges have kept the beach from prospering, and the land has become even more barren and foreboding. Little plant or animal life is found past the Yawrah River -- canines wishing to trek this way are well-advised to come with their own supplies. 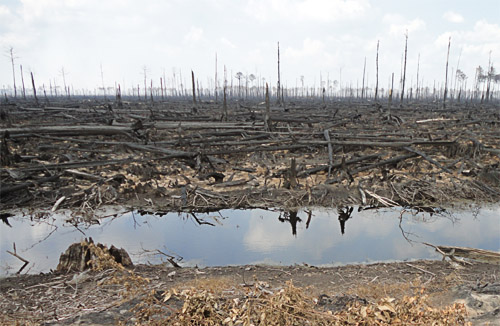 The burned ruins of the Haunted Forest are even more forlorn and ghostly. The once magnificent forest is no more; the fire took the trees to their stumps. In addition, terrible flooding later reduced the center of the territory to a boggy lagoon. Around the acrid pit of water, little vegetation has sprouted even in the time since the fire -- with only ashes as fertilizer, there is little chance life will return to this area naturally. The earth remains bleak and gray; a low fog frequently clings to the earth, as it did before the forest was razed.

The once-proud mountains were shorn bald by the fire, entire forests falling to ruin on them. Logs and other debris rolled downhill, however; in the near future, one is sure to see lush forestation in the valleys and lowlands of the Montagne Orientale. Evidence of this change exists already in the shrubs and saplings thriving on the burned ruin of the old growth.

The fire began in Hell's Coast and spread up and down the coast, devouring the sparse, dry vegetation. It has yet to grow back, and the former territories of Hell's Coast and Lightning Bay are bleak and foreboding, lifeless as a desert. The ocean still rages against the sand, seeming to increase with ferocity with nightfall. There is no wildlife to be found on the northernmost coast, save that which comes ashore. Even the seals and birds are quick to depart, however, finding the desolate beach as inhospitable as any canine would. 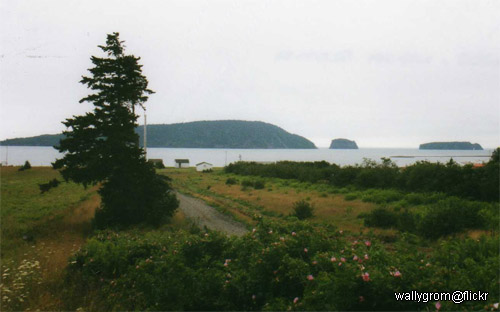 The Black Rock Islands are an archipelago of five islands on the northern coast of the Ashes and Ashes peninsula. The largest of these is Black Rock Isle, and three of the five islands, tiny Chameau Rock, Portnova Isle, and Scatarie Island nestle quite close to Black Rock. To the far south, narrow and pointed St. Paul Island sits. None of the islands are accessible from the mainland, but only a narrow inle separates Black Rock from the northerly parts of Lightning Bay. Unfortunately, all the power of the Atlantic surges through this narrow channel at high tide, and the island becomes impassable. Sand bars make the area accessible at low tide, but the malleable nature of the sand means the path is never the same.